We’re getting down to the wire here with home improvements in order to sell our home. The end is in sight!

For a year and a half we have been steadily remodeling, refurbishing, rebuilding, and repainting in order to sell our home of 18 years and move into our Class A RV full-time. We have enlisted the services of a realtor, started remodeling the gutted back porch, and hired a guy to redo the concrete driveway.

Ultimately, we would like to get the fairest price for our home, but we also are anxious to sell and get our wheels on the ground.

All the realtors nowaways talk about curb appeal. First impressions are lasting. From the beginning of our home reformation, I had staging and curb appeal in mind–even before my husband redid the siding.

We decided to take a leap and change from the stark Tudor browns and golds which predominate our floorplan in this subdivision and go to gray. This was after I perused the web and saw some beautiful Tudor revival homes done in that color. I wanted that for my home– that quaint, European, cottage-like feel. It might not appeal to everyone, but it  appealed to me, and I was sure that style would set our home apart from the other Tudor revival homes in the area.

Since we installed new casement windows in 2011, I took it upon myself to make mintons last year and install them myself out of polystyrene moulding. This enhanced that cottage-like feel.

But the trio of casement windows from the front elevation still looked a bit clunky and cookie cutter. So, I perused Google images once again, and found some Tudor cottages with–you guessed it– window boxes!

I found two 72″ PVC window boxes at Lowe’s. These were self-watering boxes which came with 5 mounting brackets a piece. The height of the boxes would cover the bottom beam of our exterior casement windows and give it a very homey look. “I’ll plant petunias or impatiens,” I thought to myself. “Yes, that would be lovely!” And it would be a menu far out of reach of the bunnies who like to frequent my front and back yards.

I had to order the boxes. And they were not cheap. But they came in quickly, and I truly believed they would add something special to our curb appeal.

As I thought about what to plant, I encountered a problem. Yes, the boxes self-watered, but how would I water them? Anything I planted would partially occlude the casement windows on either side (the center window is just a picture window.) If you opened the window to water the flowers, you would ruin them. I would have to stand on a ladder to water them from the ground below. No, I had to think of something better.

I came up with idea of fake flowers which looked real. I started to look at every craft and hobby store in my town, looking for sturdy flowers which could withstand the outdoor weather but, at the same time, look realistic.

Being a silk painter, I knew silk flowers would probably not cut the mustard, since silk dyes fade with the sun. I bought lots of flowers and vines, the majority of which were either foam or hard plastic. And I didn’t want to go too big on the flowers, since that would have been a dead giveaway that they were fake.

Fake flowers are not cheap either. But despite all my talents, I have a brown thumb. I can draw a flower. I just can’t keep one alive. I bought lots of flowers and spent lots of money on them. It takes a lot of fake flowers to fill two 72″ window boxes!

One of the most expensive parts of shopping in the floral department is buying floral foam. I don’t know why, but it’s mega-expensive. Not really worth it, if you ask me. My hubby had some stuff called insulation sheathing laying around. It is pink, and comes in accordion-style sheets from the home improvement store. I asked him if I could use it, to which he responded, “Have at it!.”

I began folding and cutting the foam to fit my boxes. I decided where and how to place the flowers and poked holes to plant them with a common screwdriver. I glued every flower and piece of ivy in place with the hot glue gun so my flowers would not blow away in the first storm.

I did two boxes, knowing that my boxes would meet in the center and carefully placing draping plants on the inside ends of both boxes to hide the gap. My husband then cut, screwed, and painted small firring strips along the bottom of the window beam. He mounted the metal brackets to furring strips and then mounted the boxes, screwing the bottoms into the metal brackets. 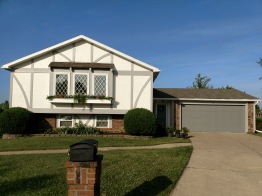 Here are before and after photos of our home front elevation.

I have had several people tell me that they love the window boxes. And many were surprised to discover they were fake. The rest of the flowers outside are alive, and I’m doing my darnedest to keep them that way.

But I can’t help but enjoy my fake flowers the most. When I sit at the dining room table, drinking my morning coffee, I look out the front window at our cul-de-sac and wonder to myself how long they will be in bloom. Of course, I giggle a bit to myself…

Hopefully, that special family–searching for their forever home–will say to their agent, “Yes, I want that house for my home–the one with the pretty window boxes!”

They’ll have their new home, and Joe and I will be off on our gypsy adventures.